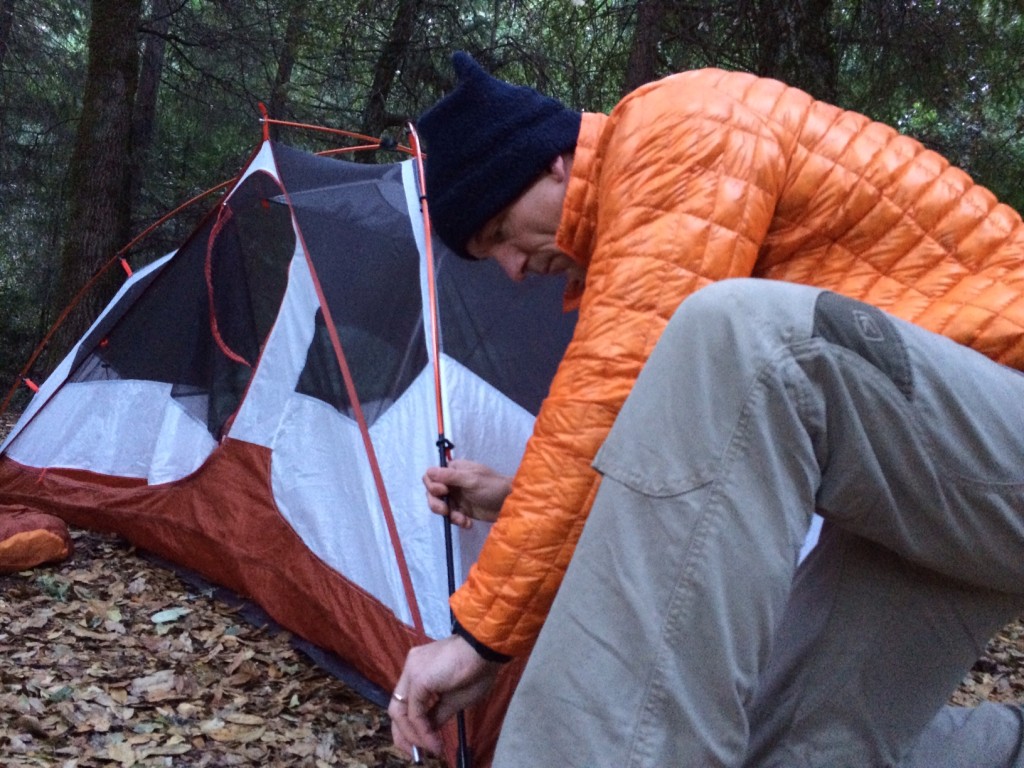 Hi, my name is Mike, and I’m a sweater.
No really, I sweat a lot. And one of my pet peeves is crap on my sunglasses – and there’s nothing worse than a nice big dribble of salty sweat on sunglasses. This has driven me to try lots of headbands.

On the bike I’m a fan of the Halo headband, but it’s pretty thick (maybe ‘wide’ is a better word), and it gets pretty saturated. Enter, the Gutr. It’s basically a silicone(?) headband with a profile shape of a ‘J’. The theory is that your sweat will collect in the gutter, and drip out the sides. Since it’s essentially just a strip of rubber, it doesn’t absorb any sweat at all, but rather channels the sweat to the side of your head. In practice, I haven’t seen the bottom of the gutter get wet – I presume because the long part of the J isn’t laying flat against my face. BUT, I do feel the sweat dripping off the sides, and I have had clean sunglasses since using the Gutr. One situation where I’ve had drips is when messing with my shoes out on the trail. Looking down can allow the sweat to pour over the top of the Gutr. When I remember, I first run for a few steps looking up into the sky – to empty out any pooled up sweat – and then lean down to do whatever. I tried the Gutr when I was on a bike trainer, and found that I’m too prone to glancing down (generally to check gearing), and I got a few ‘spills’. So for the bike, I’ll probably stick with the Halo. Aesthetically, the Gutr is pretty understated (though they do have a camo version if you want to express your inner warrior!). It’s only about a 1/4″ wide. And in case you are wondering, it does NOT have to be super tight to work. Cost: $16
Site: http://www.sweatgutr.com/sports-sweatband.html

This is a helpful app for finding yourself in a map. For example, if you’re at a large zoo you can take a photo of their park map, then calibrate the app by dropping two points on it at known spots in the park (say, the main entrance and the front of the monkey cage). From then on, the app can show your position in the map.

Maybe a zoo wouldn’t be too much or a challenge, but how about a large ski resort? This morning I downloaded a PDF version of the trail map for Fremont Older preserve – a favorite trail running area of mine. I extracted an image of the map and mailed it to myself (easy way to get a photo to an iPhone). The Snap+Map app can use an existing photo, so it imported it and I was off. I ran to two easily identifyable spots (tops of hills) and dropped my two “Snap Points”. I continued my run, and stopped at a couple of other known spot, and checked the map – it showed me pretty close to where I was, within 100 feet. When I got home I added another map, but used GPS coordinates printed on the map and hand entered the Snap Points. Since this task only has to be performed once (well, at least once per edition of the map!) I don’t mind spending the 10 minutes. I also used their Upload feature, and sent my maps to their service – so others will be able to just use a pre-calibrated map. I can foresee maps of common tourist attractions (Disneyland, etc.) being readily available as more people use the app. Of course, this app is IN NO WAY a substitute for a paper map, general navigation skills, and situational awareness. I wouldn’t download someone else’s map of a large trail run area and trust that I’d be able to find my way. Cost: $1.99
Site: http://www.fogtechnologies.com/products.html