What a great day. Not a day free of pain mind you, but great nonetheless!

I started my Saturday at 3am (I had planned on 4, but I woke up early). Had my standard race breakfast at 4 – Banana, hard boilded egg, Cliff bar, 1/2 bagel, and a Gatorade. Drove with Karen to the start, where it was still dark. After some quick words from the Race Director, we were off.

The course starts out on a flat, paved bike path – which is good since it’s still pretty dark and it serves as a warmup before the first real hills at mile 3. Which is where I made my first change in plan…and I think it was a good one. I had every intention of at least jogging up all the hills. In a past race I had a lot of problems getting going again after walking due to dehydration. Well, I got to the first hill and EVERYONE was walking. Duh. Maybe I should listen. The problem was dehydration, not walking. And there was still a LOT of day ahead, so I joined the plodding procession. I was happy when things leveled out and we could get running again. That first hill is one of the bigger ones of the course, so it was great to get it over with so quickly.

Then I was surprised – the course was much, much flatter than I had expected (and trained for). I had read online race reports that this course has very few flat sections, and the elevation profile backed that up:

But after that first big spike, things leveled out and became pretty gentle rollers for quite a while. There were still plenty of hills to walk up though, and I tried to be disciplined to not hammer on the downhills to “make up lost time”.

Karen drove ahead of me and met me at many of the aide stations. Here’s a picture of me coming into an aide station at mile 21.7:

The next big chunk of the race was pretty uneventful. I was really focusing on hydration, and had already pee-ed 2 or 3 times before the turnaround. One embarrassing moment – there was a winding section of single track trail, and I was all alone, and really had to “go”. So I figure “why not?” Pulled down my shorts a bit and just kept running (I learned this trick from Matt Aro when I paced him at the Headlands 100 last year). Fifty feet later I’m turning a switchback and hear some people, glance back, and I was definitively NOT alone. They didn’t say anything, and I didn’t ask – but I did pick up the pace and put some distance between us!!

Funniest line of the day – at the turn around aid station a young lady ready to start out on the second half gave her boyfriend a hug and then quickly apologized: “Sorry for being so sweaty!” – after 26 miles of trail running and she wasn’t Downey Fresh – the nerve! I cracked up 🙂

The next event for me came at mile 34. I was cruising along in a pretty technical section and kicked a root or rock. I didn’t fall down, but I was pretty sure my big toenail was toast. The good news was that about 15 feet after cracking my toe I started down the steepest, most technical section of the whole course. It’s basically a stream bed with tons of rocks, and very steep. Steep = foot jammed into the toe of your shoe. Yeah, definitely uncomfortable.

Another hour or so went by with pretty much just easy flat cruise, but then somewhere around mile 40 I lost my focus on hydrating properly. I remember getting to the aid station at 44.1 and refilling my Camelbak, and then in the intervening 2.9 miles to the next aid station I pretty much drained it. This section was the most exposed and arid of the course, and also had a 660 foot rise (so there was a lot of walking). Why do race directors feel compelled to put the hot, dry sections of a race right near the end?!? But indicative of how well this race is run – there were aid stations on either side – so that was nice.

Then the real pain began – not due to the course as much as my own (pick one): vanity, drive, insanity. Right at mile 45 I glanced at my watch and saw: 9:08. I was stunned. I was thinking it would be saying 10 something. Up until then I had tried to keep my eyes off my watch, not stress about pace, not endlessly do the math of this many miles divided by that time, yada, yada. But 9:08!? Dang, if I could bang out 10 minute miles from now on I could beat 10 hours! The only problem is that my normal pace on trails is more like 12 minute miles…and I’ve had a 45 mile “warmup”. Screw it – I’m going to go for it. And I started working like I’ve never worked before. There was an aid station at mile 47 that I took like an Indy car pit stop – they reached for my bottle, but I just kept it in my hand, got a top off of water, and bolted. Leaving the aid station I looked down – 9:30:01, with three miles left. Up to that station had been pretty flat, so I was feeling upbeat. Then I turned the first corner in the trail and was hit in the face with a long steep uphill. Oops. I power walked it and kept drinking, and then started running as soon as I could. If you look at the last three miles of the elevation profile above you’ll see the many little hills – ouch. After walking the first one I knew I couldn’t walk any of the others. Those last three miles were the hardest miles I’ve ever run.

I was really, really, really happy to come around the last corner and see the finish chute. I glanced down and saw that I had a minute to spare. My final official time was 9:59:35. All grins for me. And then something new – I came within an inch of breaking down in tears. It was such a relief to be done, so happy to have squeezed in under 10 hours (when my stretch goal had been 10:30). Here’s me right after the race (and yes, I do my own hair!): 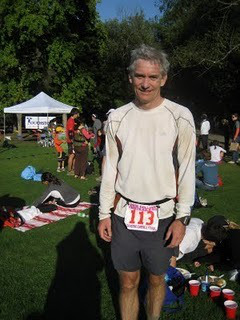 Then the eating. Oh, the eating. According to my Garmin watch, I expended 6646 calories over the course of the run. I calculate that I took in around 3000 calories from my Infinit drink. Right after the race I had two bottles of recovery drink, and I tried some bread, soup and a hamburger (but the hot food just didn’t sit well). On the way home from the race I asked Karen to pull over so I could pee and get some french fries, which ended up being a hamburger and fries (which I drenched in salt). Even though my Infinit has the electrolytes turned all the way up, and taking 2 Thermolyte tablets an hour, my body still craved salt after the race. When I got home I sliced up a mango and sprinkled it with chili powder and salt (Mexican style!). At 10pm I asked Karen to cook me some eggs and (5 pieces!) of bacon. There was something else in there, but I can’t remember what it was.

As for the schwag – this race is schweet! In a reusable shopping bag was a nice windbreaker, a tech shirt, a logo’ed wine glass, a water bottle, TrailRunner and UltraRunning magazines, and then the requisite coupons and ads.

Sunday morning – I feel pretty good today. My shoulders are sore – I’m not sure if it’s from the Camelbak, or more likely from carrying a bottle all day. My legs are fine as long as I’m stationary, but they like to “remind” me whenever I move around. The toe I whacked is tender, but it looks like it will be fine. All in all, not too bad.

Thanks to everyone for their well wishes, and to Karen for being my chief supporter and super crew during the race!