Two weekends ago I participated in a local 100mile run as a pacer. One of the competitors asked on the race forum board if anyone would like to run with him for the last 25m of the race, and I took him up on the offer.

I then did a little looking into his background, and I got a bit nervous…the guy’s an animal. He came in first and second in two triathlons – DOUBLE IronMan races!! Two weeks out from the race he mailed me about his last long training run, a 50m run that he did in 8h 13min – and that was a holding back run to not incur the need for an extended recovery. But in the end, I figured that a 75m warm-up would even things out considerably.
Race day on Saturday came, and the online tracking wasn’t working, nor could I reach his girlfriend who was crewing for him. I had hoped to get an idea of his 50m split to gauge when he would show up at 75m. So given the lack of info I just drove to the race site, and got there about 6:30pm.
Upon getting there I see that they have the splits posted for 50m, and there he is in second place:
Matt Aro – 9:00:54
Let me tell you, that’s SMOKIN’. The first 50 was very hilly, with some pretty technical trails, with 8100′ of altitude change! The first place guy was 2″ ahead.
I got dressed and sat in my car, estimating that he would be arriving somewhere between 8:30pm and 9. He arrived right at 9pm, and we got going shortly afterward. 75m split: 14:01:17. There was no sign of the previous leader, who eventually hit the 75m mark half an hour later.
We ran with headlamps, but there were portions of the trail where it was quite foggy, so I was glad that we also each had a handheld flashlight. In the fog all you can see with the headlamp is the fog 1 foot from your face, so we just turned those off in these sections. Another thing I learned is that holding the light lower increases the contrast of rocks and roots considerably. So the next time I do a night run I’ll figure out a way to mount my headlamp on my waist.
As for the run, it was pretty slow. Matt was pretty trashed, the uphills were too steep to run, and running down the more technical hills would have been suicide. For many of the downhills Matt rested his arm on my shoulder just in case – but I don’t recall him ever slipping. I nailed one root somewhere in the middle of the run, and half rolled my ankle like 7 minutes into the run, but it didn’t affect the rest of the run.

At each aid station Matt’s girlfriend Shevaun was there with his own private stash of goodies – ibuprofen, gels, salt tabs, and PBJ sandwiches. We would refill his camelbak, he’d grab a sandwich and stick it under the thigh of his compression shorts (no joking), he’d tell her what he would likely want at the next stop, and off we’d run into the night. I can tell you, she was a GREAT help!

As the night went on we started passing people who were still in the 50-75m loop (the race is one big 50m loop, followed by two laps of a 25m loop). Some of these people were walking (it’s midnight by now) and on the ridges they were pretty cold (strong wind and fog – the course was right on the coast). I felt bad for them, many of them alone, and knowing that they had a LONG trip ahead of them. But we just kept moving.

To brighten his spirits I wrote down a forum posting that his training partner back in Wisconsin wrote to him the morning of the race. After a couple of miles I broke out the mail bag and read him the encouraging mail – he was overwhelmed! I had wanted to keep the mail as a just in case, but then I got scared that I would forget – so I just busted it out when I thought of it. After 15h of running, he was pretty happy to hear from home.

Matt really only got “dark” once. He stopped for a while and had a hard time not being light headed. He took a caffeine pill, we stopped talking, and turned off our headlamps and just walked for a while. He soon recovered and we got back to running.

One interesting element of the course is that you run through tunnels that lead up to bunkers built in 1940 to protect the Golden Gate from bad guys. I read later that the cannons installed there could fire 26miles! 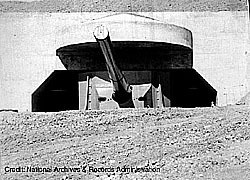 Of course, the guns are gone now, but all that concrete is still there, along with a tunnel going straight back behind the gun. Matt had run through them a couple of times by then, and didn’t know what they were when I asked. It was only by looking back once we got through that I realized they were bunkers! 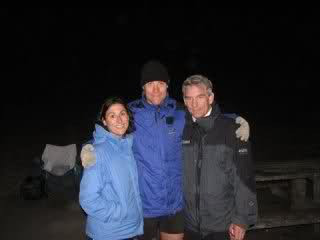 So there we are, 4am and finishing the race…so what the heck do you do now!? I started my 90 minute drive home, but about half way had to pull over and sleep for a bit. I got home at 8am, ate and slept for quite a while.

Big, big fun. Matt’s an amazing athlete. Shevaun was a great help. And the course was incredible. For the west coasties, I strongly recommend the races put on by PC Trail Runs (http://www.pctrailruns.com). They do lots of Northern California runs, and some in So Cal as well.